There is a singular word for it – ‘phenomenon’.

Within days of its launch, everywhere across the globe, downloads took place by the millions. It felt like the world was suddenly taken over by those in the know and on the go, leaving the rest of us rather perplexed.

Outside my flat in Geneva I saw them daily – mobile phone gawkers, walking, eyes glued to their screens, oblivious to those around them. I couldn’t understand it. Then I learned it was all about Pokémon Go. A new game in which players Travel between the real world and the virtual world as they find and save Pokémon characters.

The game may be a play on reality, but the headlines about its impact were very real. According to Fortune magazine, within 3 days it had become the biggest mobile game in US’s history, adding US$ 7.5B to Nintendo’s bottom line, and completely reenergizing the company. The stats amazed me as much as the craze. Nintendo’s share price rose just over 9% when the game was first launched, and then saw a further surge of 24.5%, representing the company’s highest one-day climb since 1983.

So, seeing that I needed to get in the know and onto Pokémon Go to really understand what was behind the hysteria, I downloaded the App and there, immediately, was the answer – I have two Pokémon within 100 meters of my home. 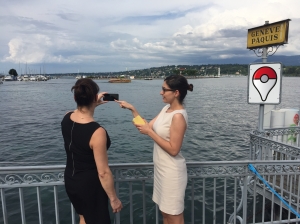 Pokémon is nothing new – the video game was first launched in 1996 and needless to say kids became hooked, spending hours playing it. This time around, however, Nintendo has licensed this to an App developer that has made it interactive as you need to get out and find these hidden characters, and they have made it multigenerational – every one of every age is getting hooked. The aim is to get outdoors and search your surroundings for little beings called Pokémon.

I must confess that initially I was anti-Pokémon Go. From the outside it looked as though it was the next level of mobile impoliteness. More people glued to their mobile phones, ignoring people and places right in front of them.

But then, as I thought about it, something very commendable about the game occurred to me: this App is getting people out of their homes and into the streets. People are getting outdoors and exploring the world around them. The App’s developers have purposely included iconic landmarks along with lesser-known places that players visit on their journey. People of all ages are getting off their sofas and starting to discover their environments, often seeing new things that have been around the corner all along, but they didn’t know existed. They are also meeting new people with a shared interest and excitement for local discovery. Less than a month since its launch, Pokémon Go is now so ubiquitous that I read that coffee shops and police stations have designated themselves ‘Pokestops’ in hopes of attracting new visitors. Museums and art installations are jumping on the bandwagon, encouraging players to visit their locations to catch rare Pokémon while taking in the destination’s tourist sites.

Speaking to Pokémon Go players in my neighborhood, I learnt that they themselves have discovered unexpected sculptures (we have wonderful art in the city of Geneva), stunning architecture, little known paths that they have been living alongside all of this time, but never paid attention to.

Interestingly, this reawakening of wonder in the world around us sounds very familiar to how we at Trafalgar put our trips together for our guests – finding special local spots alongside the icons, encouraging exploration. It was a good feeling knowing that the essence of our approach to travel is still alive and well, even if its latest manifestation is in an augmented reality form.

Because the enduring truism is this: we humans are wired for adventure. While we may have firmly set comfort zones – where we live, our habits, still we seek newness of thinking, of doing, and of being. Travel allows us these little windows into discovery, a way to venture out of our comfort zones to become exposed to other worlds, and other sides of ourselves when placed in these new environments. With this learning comes freshness of perspective of not just the world around us, but of ourselves and our place in the world. At its simplest yet most profound form, this is the gift of travel.

In many ways, the hunger for discovery that Pokémon Go is creating in game players can, and I hope will, ignite in these same people a desire to go out and seek more of their real world – the one without the hidden Pokémon.

Which is why, returning back to the real world of augmented reality coming to life around me, I accept that at this first stage Pokémon Go players may all be walking with their eyes glued to their screens. But does that matter? The intrinsic benefit is that millions of people are getting out and seeing the world around them.

Technology has already been harnessed for travel. Now travel is harnessing technology. The joy of ‘Go’ is ours to be embraced, in whichever world we choose to play.